After 31 sold out shows on their first run, The Used will be hitting the road again for a second leg of their fifteen-year anniversary tour. Due to high demand and the success of the initial tour,the band will once again be playing two shows per city, performing Self-Titled and In Love and Death in their entirety, plus more each evening. The second part of the tour will kick off onAugust 16th in Portland, OR and wrap on September 28th in Atlanta, GA.

Tickets and special Meet & Greet packages, which include an intimate meet & greet, photo op, early entry, copy of Live and Acoustic at the Palace, signed set list, tour laminate, tour t-shirt and tour poster, will be available for purchase this Friday, June 17th, here. A portion of all Meet & Greet packages sold will go to the Living The Dream Foundation, an organization that gives fans with terminal diseases the chance to have an All Access Dream Day with their favorite bands. To purchase tickets and find out more information, please visit www.TheUsed.net.

Back in April, The Used embarked on the first run of their fifteen-year anniversary tour, which sold out in 31 markets across the United States, including Seattle, Salt Lake City, Philadelphia, Chicago, Los Angeles and more. Now the band is back and ready to celebrate their first two albums in cities like Portland, San Diego, St. Louis, Cincinnati and Atlanta.

This past spring, The Used released Live and Acoustic at The Palace, a live CD/DVD, which hit #11 on Billboard’s Current Albums chart with over 14,500 copies sold. The album was recorded at the band’s intimate unplugged storyteller performance, which took place at The Palace Theater in Los Angeles last March. Fans who were unable to attend the once in a lifetime performance now have a chance to watch the band perform in a way they have never performed before – with a 4-piece string quartet and harpist (arranged by Hiro Goto), a piano player, percussion and a 3-piece gospel choir. Fans can purchase Live and Acoustic at The Palace now here: www.TheUsed.net.

About Live and Acoustic at The Palace, lead singer Bert McCracken shared, “I think we really captured the night perfectly and listening back to the mixes it reminded me how music can allow us to be children once again and once you open yourself up to that emotion it’s like a virus, it’s contagious.” He continued, “Nearly every eye in the venue was weepy the night we played with the orchestra because these songs are so emotional and this recording is a truly special thing that I can’t wait for everyone to hear. It still gives me goose bumps.”

In order to fully recontextualize these songs, the group worked with Hiro Goto on the strings and harp. Together, they arranged the various musical elements and helped the band bring out dimensions in these songs that they didn’t even know existed. “The whole time we were making this I couldn’t believe it was happening,” McCracken explains, adding that 3 gospel singers and instruments like the harp helped these songs take on an entirely different emotional resonance than the post-hardcore, guitar-driven dynamics that initially propelled them. “I’m so proud of this band for working hard to pull this off and at same time I feel like this is what we deserve because we worked so hard to get here that it felt like a victory lap in a lot of ways.”

Fifteen years ago, four teenagers from Utah created a band and released a collection of albums that shaped the space of the alternative rock scene.  High energy live shows, gut wrenching relatable lyrics, and melodies that blended pop sensibility and hard rock was the perfect combination to make an everlasting impression on fans globally.

The Used’s latest LP Imaginary Enemy put the band’s political frustrations and commitment to social change at its forefront and has opened up the platform for conversation among fans and critics alike. The album climbed high on the Independent, Tastemaker Albums, Hard Rock, Alternative, Digital Albums and Top Rock charts. Fans can purchase Imaginary Enemy on iTunes here:http://bit.ly/ImaginaryEnemy.

Going into year 15, The Used are stronger than ever and are looking forward to an incredible evening of making memories. 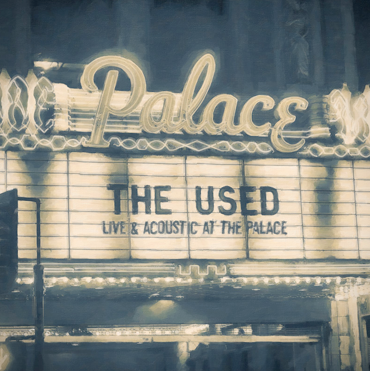 For more information on The Used, please visit:
Website: www.TheUsed.net